Weaving two scarves at once

As I was scrolling on Instagram, as one does, I saw @balgarviewweaving weaving several scarves at once, next to each other. I immediately wondered how this was possible: I focus on weaving structure and technique, and had just woven some wool scarves, frustrated that something so narrow could only be done one at a time. If I could just weave several next to each other, that could go faster, and make them more affordable. The Instagram post mentioned "loop de doupe", which I hadn't heard of before. A-googling I went, eventually finding that "doupe" is the name for the special heddles used in leno. That was a word I'd heard before, specfically for gauze weaving, and it involves something you just do not do in normal weaving: twisting warp threads with each other.

Armed with this new keyword, I went researching more deeply, to find schematics and instructions. The University of Arizona's extensive archive of textile documents delivered, with a series of detailed articles about gauze weaving from Posselt's Textile Journal. The first one had what I needed, explaining how the threads moved and how the loom was setup. However it was designed for a jack loom, where the shafts are only left in place or lifted. I've got a countermarch loom, so I needed to adapt things to work with shafts that are both lifted and dropped. Which is why I'll now explain how the technique works, how I setup my loom, what results I got and what I'll improve next time.

I've mentioned that leno involves twisting warp threads with each other, but what does that mean? In a normal weaving setup, warp threads only move up or down, so the weft goes under or above them. With leno, they can also be pulled to the side, creating a twist that the weft will hold in place, and that will hold the weft in place, too. Some pickup techniques do this for specific effects, but are obviously very time consuming. A leno setup can automate the twisting, which is how fabrics like gauze are woven. On a smaller scale, the twisting can be done only on edge threads, creating extra friction that will keep the weft in place even if it's cut. This is apparently common in industrial weaving, with big bobbins at the back on a special device that rotates them. Obviously, we don't have that, so we need to create this twisting with shafts that only move up and down, like in the old days. The schematic below shows our goal: note the mirrored twists that will make us use two versions of the setup.

This is where doupes come in. As the Posselt article above details, doupes are special heddles that pull a thread around another. A full gauze setup would have doupes on every other thread, plus a tensioner to compensate the extra take-up caused by the twisting. Luckily, we only want extra edge threads that can keep our weft in place: we can just put those threads on bobbins dangling at the back of the loom, as shown below.

I made my doupes with texsolv heddles, which is the first thing I would fix next time. That caused way too much friction and made the weaving difficult, in addition to damaging the heddles beyond repair. My first sample used a single "skeleton" half-shaft, with a single heddle, the doupe, looped around the thread: the doupe only hangs from one side of the shaft, which is why it's called "skeleton". Note that this half-shaft therefore needs extra, regular heddles on the side to keep the bars attached to each other! The production weave used a dual-shaft setup as described in the Posselt article, with a skeleton half-shaft, and a standard shaft with regular heddles. The doupes go through the eye of the regular heddle, then back up through the top. That kept the doupe in place a bit better, but might only be really necessary on a jack loom.

The doupes can be "top" or "bottom", that means attached to either the top or the bottom of a shaft. With top doupes, pictured below, they'll be tightened i.e. activated by lifting the shaft. With bottom doupes, they'll be activated by dropping the shaft. You can just flip the schematic upside-down for how that would look. With the two-shaft setup, the lifting or dropping is relative to the standard shaft: the skeleton shaft stays still, while the standard shaft goes up (for bottom doupes) or down (for top doupes).

Between the regular shafts and the doupe shafts, the companion thread is passed above and to the other side of the doupe thread, creating a twist that will be pushed to the front and locked by the weft, then be compensated by an opposite twist as the warp goes back to its resting position. This of course means that the douped thread needs to be sleyed in the same dent as its companion, otherwise the reed will prevent the twist from traveling forward to the open shed. In the schematics below, the left side shows a front view of the heddles, while the right side shows a top view of the warp. The red thread represents the weft being passed on a given pick.

The treadles tie-up got a bit complicated. The countermarch means I don't need perfect balance in the setup, but if a shaft is either idle or going in a single direction all the time it's still going to need balancing. That's how I ended up tying up extra treadles I didn't use, just to keep things in equilibrium.

On the Swedish-countermarch draft below, the base weave is a 2-2 balanced twill. I added two shafts at the back: P1 for the companion threads, P2 for the douped threads, and balanced them with the extra B treadles. I then added two shafts at the front: S1 is the skeleton with the doupe loops, S2 is the standard shaft. This was using the two-shaft setup with bottom doupes. Black squares are long strings that pull shafts down, white squares are short strings that pull shafts up, crosses are untied.

NB: This is reconstructed from memory as my notes were faulty, I had to iterate while in the loom, and obviously forgot to take new, correct notes. I will update this next time I set a warp up if I find a mistake.

I setup the warp as normal, with four extra threads on each side and spacing between the parts. This is because I didn't want one shuttle selvedge and one cut selvedge on a scarf, so I needed extra waste fabric on the side to catch the shuttle turns. This had the immense advantage of not having to care one bit about how neat the selvedges were: they'd be cut away. I left two centimeters between the two scarves, which was a bit more than needed. 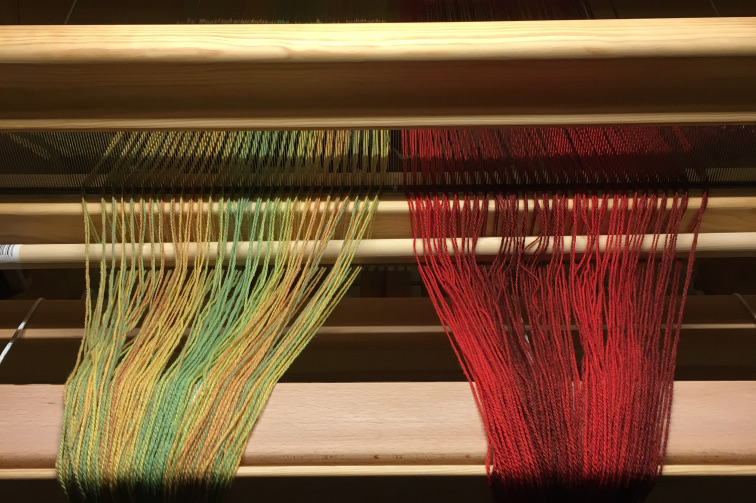 The weaving went well overall but was definitely a bit touchy. My extra edge threads were spun silk while my main warp was grabby Swedish wool, causing snags at time. As mentioned, the texsolv doupes caused too much friction, which caused more snags here and there. That meant that the twist sometimes didn't form properly, and I had to fix 30 or so of them after cutting down. That fixing was time-consuming enough to negate most of the savings from the technique, since I had to examine the cloth thread by thread with a magnifier, carefully cut the weft when I noticed a missed twist, and manually re-twist the extra threads and pass the weft inside it. 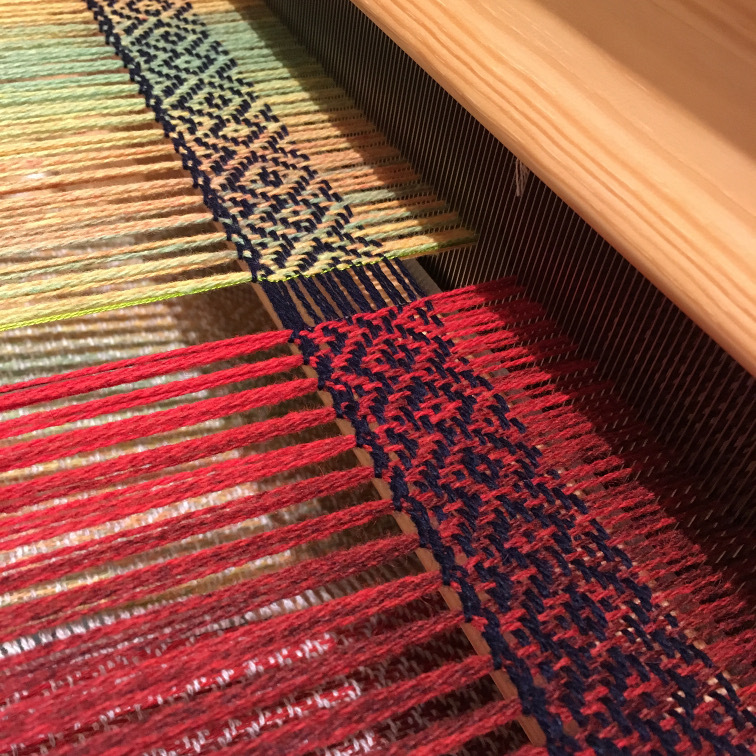 I twisted the fringes directly on the loom as per this video series. With the wool being somewhat grabby, it means that I only had to weave extra tabs at the start and end, then could just cut down and toss the whole thing into the bathtub for fulling. The downside of the in-loom twisting is that one side would be lovely and well-formed, while the other would be a bit loose. That's due to the twisting direction interacting with the yarn's own ply twist. For finishing, I used warm water and agitated a fair bit, making sure to work the edges so the extra threads would meld with the weft. I could then cut between the various parts, striving to keep them even. 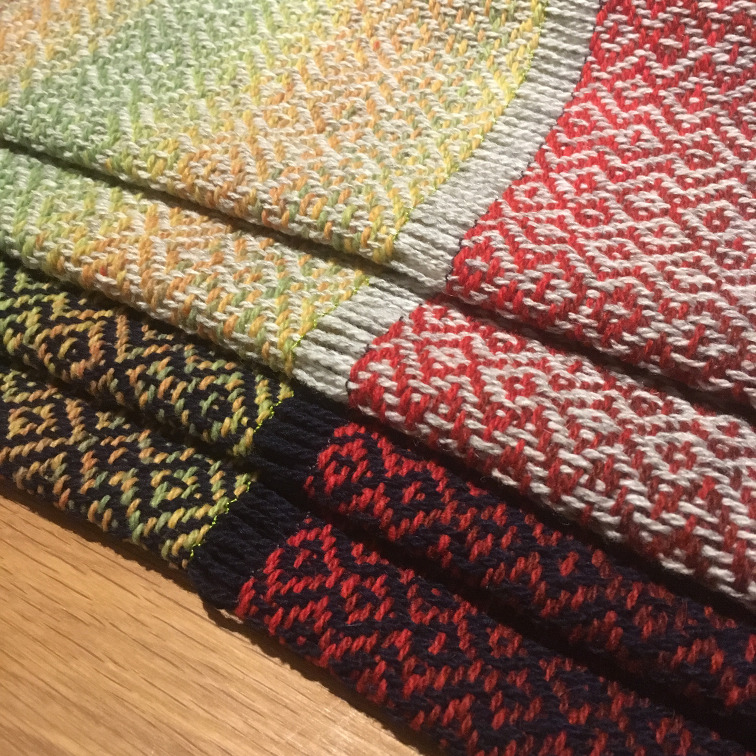 The result was definitely worth the effort. I was able to weave two scarves at once, without having to think about selvedges while weaving. The resulting cut edges are fluffy and lovely. I'll definitely try it again, but with smoother, homemade heddles for the doupes, smoother edges threads, and skipping the skeleton shaft as I suspect it's not necessary on a countermarch. I'm less convinced about in-loom fringe twisting, since having one side turn out loose is not quite acceptable, at least with this type of yarn. One of the resulting scarves is still in the shop.